Delaying the Inevitable and Why

When I had made the decision to not squeeze out a quick post on Saturday evening around ten, I knew there was a chance that the post would get postponed by more than a day. Nonetheless, I had decided to take that risk and trust myself to write it at some point. That point is right now, on Tuesday, the other day in which I had decided to regularly post. So, technically, there should be two posts today, but instead I'll postpone Tuesday's post for some other day and post Saturday's today. Make sense? I hope so.

I will proceed to list some of the activities which had kept me busy and thus unable to post. Sort of.

Friday at two I went to see a showing at the Zagreb Dance Center. A work in development by Darío Bardam, Aleksandar Georgiev and Zhana Pencheva made me visit that controversial place. Balkan drag culture and cliché but fun song choices for solo dance choreographies made it a curious event, while the evening of the day was reserved for the race to meet a midnight deadline. My cousin, who is an actor and singer, had hired me to make her a showreel. We had met to look at the footage she had and choose the shots which best showcased her talents and skills. I was to edit it into a video and send it to her before midnight, while she rushed home to write herself an actor's curriculum vitae for an open call. Between all that, we also did a photo shoot with a table lamp in my hand as lighting, a Nikon camera on which I couldn't find the white balance and wall corners in photos that I had to edit out. In the end, she wrote her curriculum vitae and included a very nice headshot photo despite the amateur conditions it was taken in. The showreel, however, wasn't finished in time. There simply wasn't enough time and my computer wasn't happy about one of the clips being in 4k and about that other hour and forty minutes 1080p video.

I finished the preliminary showreel on Monday and am waiting for some footage in better quality. Once finished, it'll be a nice showreel. Also, my cousin heard back from the company that had the open call... They don't want her, apparently. Boo. 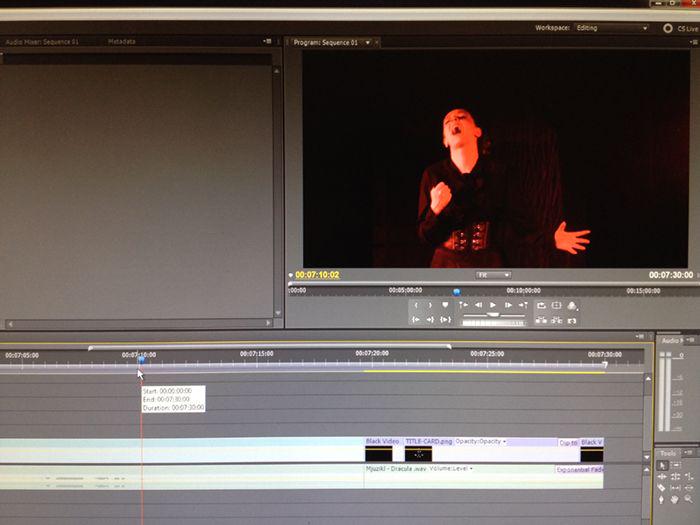 my cousin and me are both hireable. please hire us for money (acting/singing; video editing/anything)

Saturday I had mostly spent in various pains of several origins... Whether gallbladder-related, menstrual or that part of my back I rarely exercise but kind of overworked when I did video yoga the previous day. Despite that, I managed to cycle all the way to KUC Travno to see the performance Opna (choreographer Irma Omerzo). I vaguely remembered being in that space once before, years ago... on the Festival novog cirkusa? It's possible.

The piece was... intriguing, but a bit uncomfortable. I don't have trouble with unconventional seating of the audience, in this case within a plastic balloon of sorts and on the floor, while the performers move around and on the balloon from the outside. However, I couldn't connect to the material and while an enclosed, warm space could remind of a womb or a cozy space, the plastic material and part of the performers' movements left me with an impression of something almost cyborg-like and a little anime dystopian. Overall I felt there could have been more, somehow.

Afterwards I ate hipster burgers with the person I went to see the performance with. A former professor of mine also had a cameo, as he came into the joint to pick up the takeout order he made an hour ago.

On Sunday I had been... tired. And outside for most of the day. I met up with a friend and we had coffee in a fancy, freshly renovated theater-themed café before going to Ni prijatelj ni brat (director Marina Petković Liker), a performance held in an apartment.

It was interesting to observe the rules and conventions that were build specifically for the space and circumstances (conventional theater rules about 'not seeing' some things or reading things in a specific way don't apply here). There were some clever solutions with lamps used to emphasize key spaces, items and actor actions. I was also quite pleased with the actors' techniques. I rarely watch performances that feature actors, but I'll admit they managed to seduce me and sell an iffy directorial decision or two. While the option to move around the space was there, I felt no need to get out of my seat. Whatever scenes I didn't get to see, I experienced them through other senses, since the heavy atmosphere bounced off the walls of the small, enclosed space. While I wasn't sold on all the creative decisions made in this piece, it's oriented in the right direction and I'm glad to have seen it. We didn't stay for drinks after the performance, but perhaps I could send a feedback e-mail or something.

On Monday I got to stay at home and wash my dishes. Although my flat is specific and barely a home, I could almost feel it wanting to spend some alone time with me. Having it tidy and cared for makes both of us feel better, so much so that I ended up pulling an all-nighter, working on some art pieces and overdue art gestures. I am still in that vibe today, even after reading a self-help book from start to finish that my mother recommended to me. It wasn't half bad, but absolving control is all fun and games until you get hurt or stuck in a situation you cannot escape from. Also, homosexuality is not a 'transitional' phase and Freud is a complete hack. 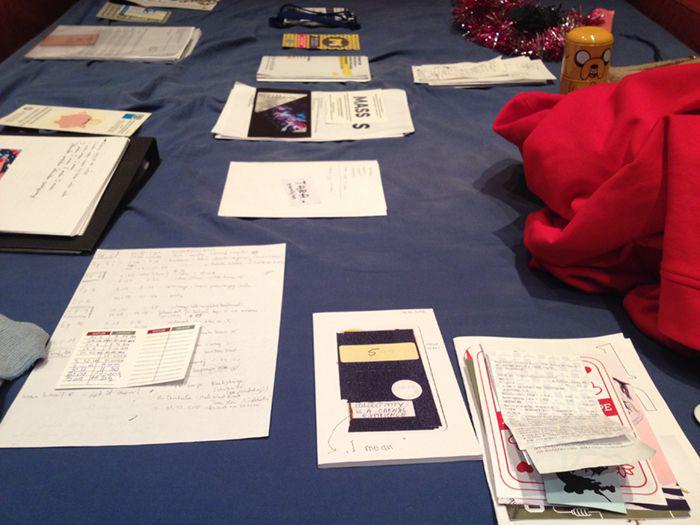 nothing compares to organized piles of paper

So you see, I was very busy with living. A late post is vaguely understandable (not really). And I didn't even write about the art stuff I did! Am I leaving that for next time? Most likely Thursday? Maybe... Thank for your being a patient but interested readership (of one, two or three people that I've linked this blog to). A step at a time. A learning experience. And so on.