Accumulating and Struggling to Understand

As I sit in a room that managed to get messy in less than a day (that is the reality of my living space or is it me living in a space), my mind is jumping between at least ten things that are asking for my attention. Four different text conversations (I am most interested in Valencia's sea, weather, lemons and sitting on the grass... and that other thing). A telephone call about a legal document I need to take somewhere tomorrow (and make a copy if I only have the original). Dishes to wash after making lentils and amaranth yesterday and pouring technically expired but still good (I hope) cooking cream over it today. The crunches I hadn't done yet as part of today's workout. Scheduling the next couple of days. The living and financial prospects for artists (and others) in this cursed, nay, evil environment. A feeling of protectiveness. Crying a little. Maybe I can go for a run after this post. I want to keep the lucidity I am feeling somewhere in between all this and take it with me into all future moments. A like on Facebook from a former Person in my life? Now? Subconsciously comparing the past with former Person to the present with another Person. Work for money. The scribbling I've referred to in the last post and whether it's art, an artistic gesture, a beginning of future art pieces or time that should have been spent differently.

I refuse to believe that this is a way of living and perceiving that should be cultivated or encouraged. I like trying out different things and not locking myself into a single thread of interest or activity, but this is ridiculous. And destructive. And has been written about extensively already by others. Social media, multitasking, millenials, capitalism... We know the story.

and when searching for a precise definition of 'sifting', just to make sure i'm using the word correctly, this visual pops up which directly reminds me of the hours, a film adaptation of a book, and the woman who felt trapped in her domestic, us, post-ww2 life and after failing to make a cake, although she knows you have to sift the flour, checks into a hotel with the intention of killing herself and also she was pregnant at the time and had a living child that was traumatized by his abandoning mother. i don't know what to tell you. i just wanted to check 'sift' and actually sift rather that add more 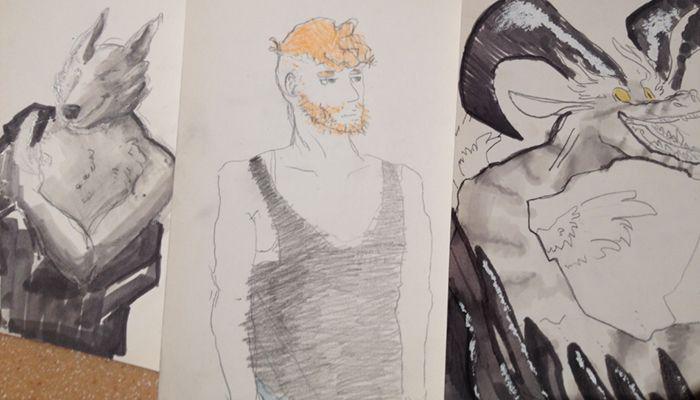 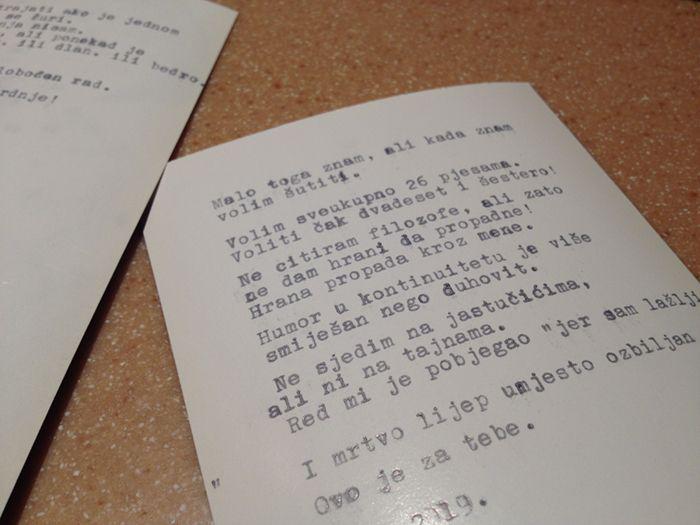 These are three papers with drawings and text on them. I have two piles of blank papers of the same size. One is glossy on the back, while the other isn't. I had spontaneously drawn the wolf, worked on it again a day or two later and used the typewriter that lays mostly dormant next to my PC to write a poem on the glossy side. Then I made the other two. One uses markers that were rather pricey and I feel I should use as much as I can before they dry out, while the dude is coloured with pencils I've had since first grade of primary school. This is not the first time I'm doing an 'image on one side, text on the other' combination. I am not sure where it's going, but I want to let it lead me. I like how the drawings make me feel. That “I can draw” feeling. 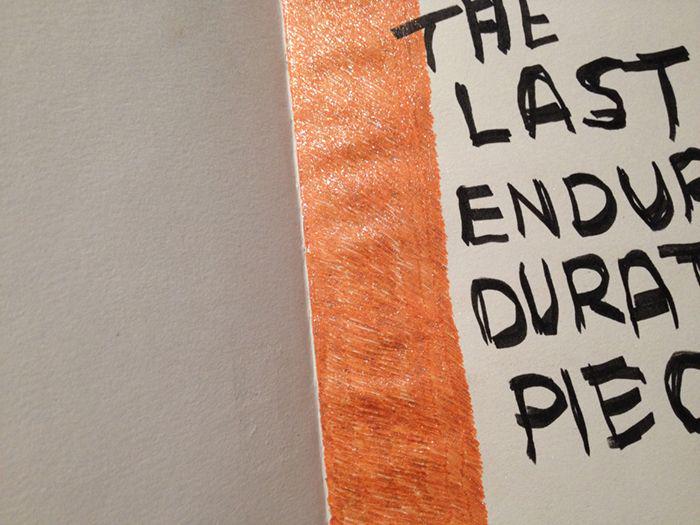 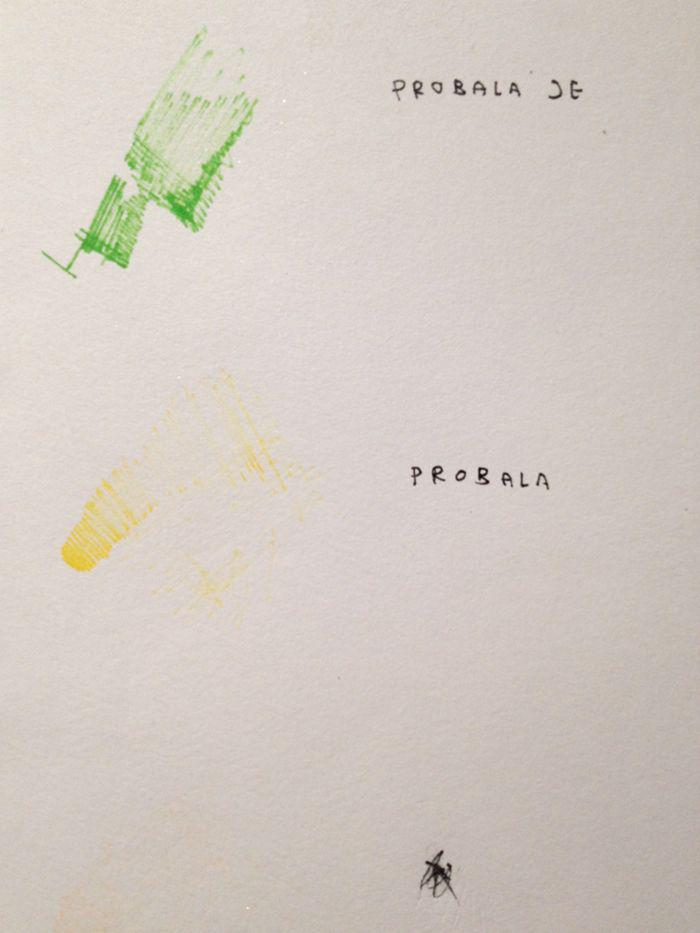 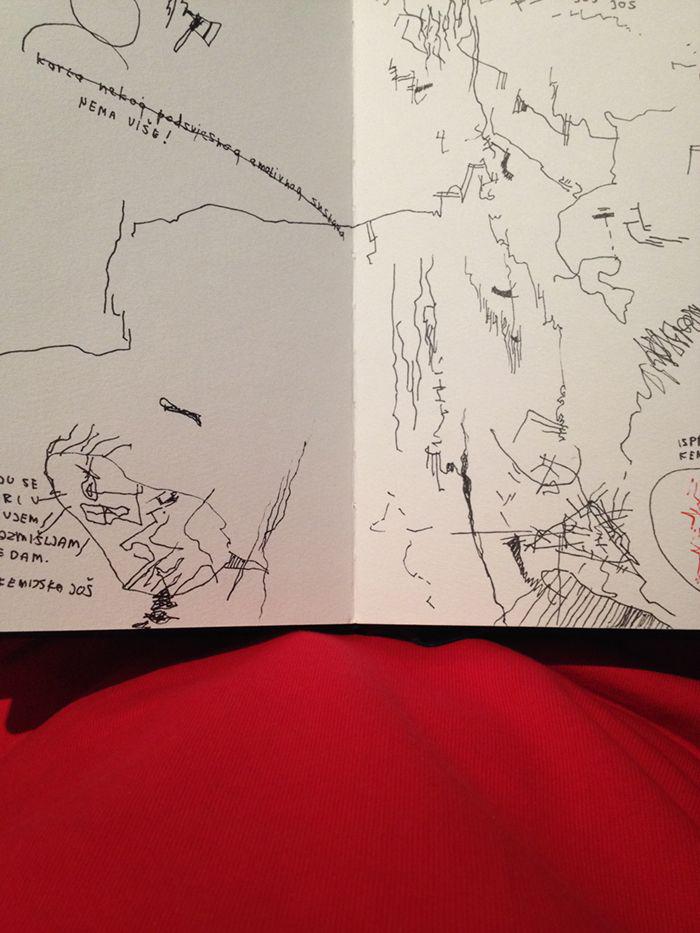 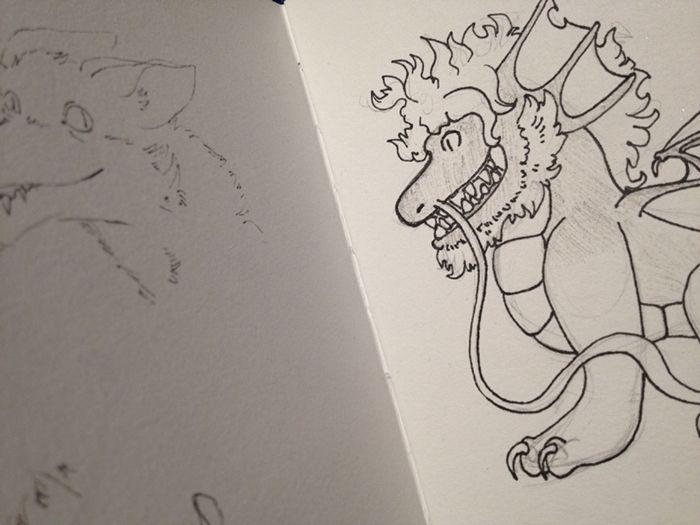 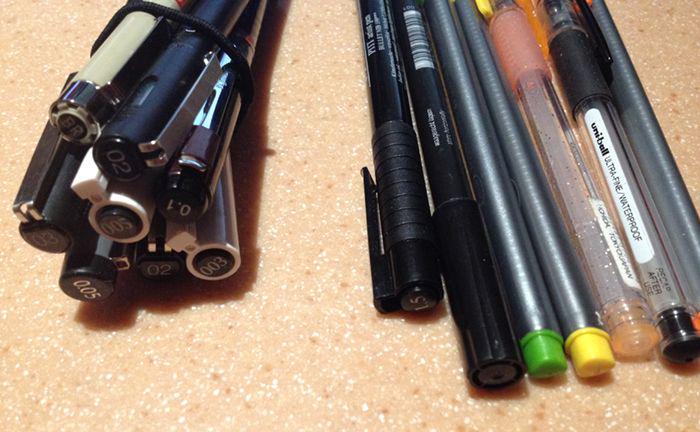 A friend of mine that had lived in a part of my living space at some point left some items behind. One of them was a notebook which I've appropriated with her consent and turned it into a book of leftovers. Whichever materials, pencils, pens, cutouts, stickers and so on that I want to use but don't know where or how, I use in that notebook. The pens on the left still work and need to be used, while the ones on the right are ready to be recycled. I simply dislike things going to waste and since I can turn things into art pieces, I do. The images I've posted are the latest pages. 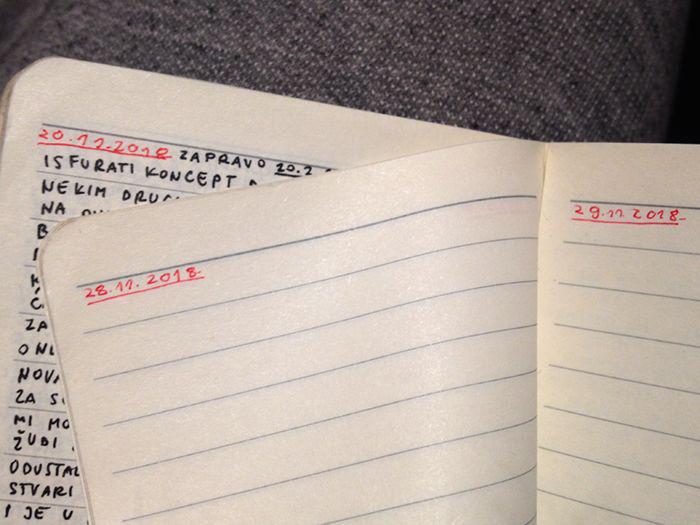 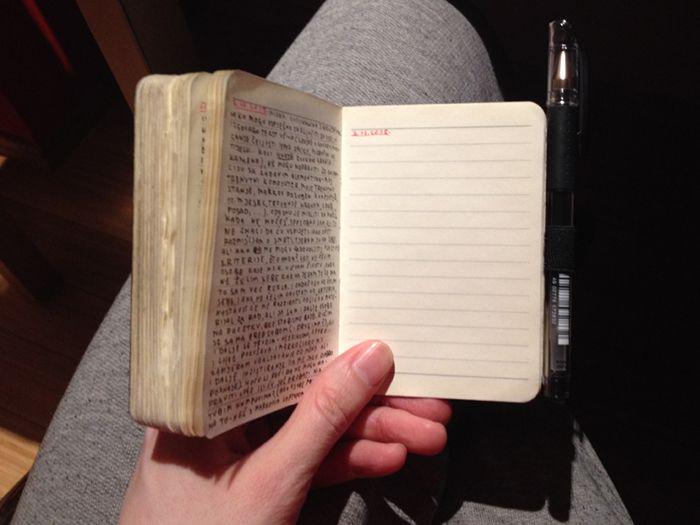 This is not an art piece, I think, but it is a tiny notebook which I've almost entirely filled out. At one point, I had counted the remaining pages and it turned out to be the exact number of remaining days until 2019, which I took as a sign to write out a page of text for each day. I... kept to it for the first twenty days, which is pretty good, but I didn't do the remaining forty. So after buying a very specific pen that I use for it (the old one dried out), I've begun filling out the remaining pages. 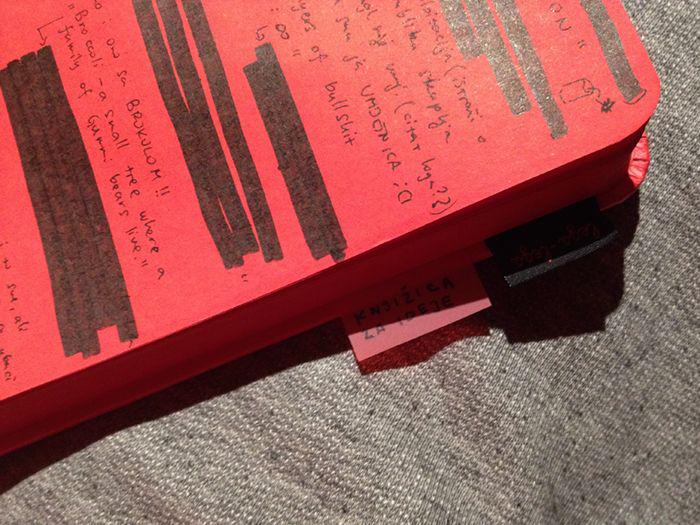 I once bought a notebook with red pages and began writing artistic ideas and concepts into it. This started in two thousand and ten. Two days ago I decided to cross out some of them – because preserving everything isn't necessary – and continue writing into the mostly empty notebook with both a black and a white pen. I'm leaving the concept open enough for it to become a book of something else, because I don't have the need to put so much emphasis on concept nowadays. Although... It's still there. Everything I've described so far has an internal logic to it, but hopefully one that is gentle enough to allow the generating of content that isn't conceptual. 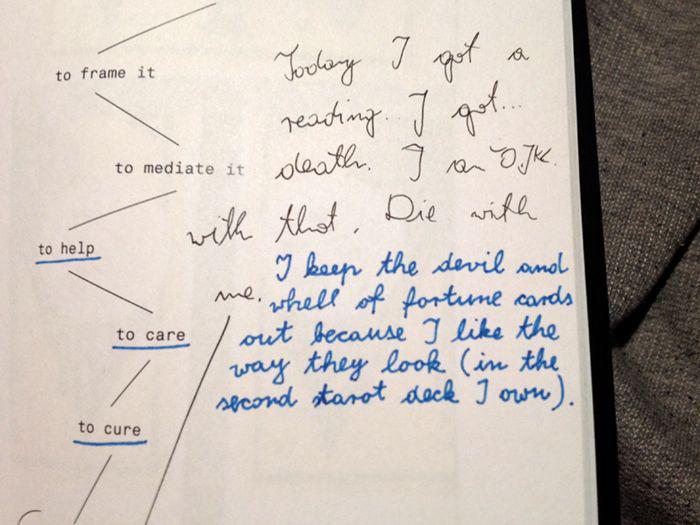 Finally, this is a page out of a publication for someone else's work called It Could Be a Community (authorship details on the Facebook event linked on the page). I remember the event and publication well, because I had come to it drunk and deeply in crisis. I laid down in some dark corner and cried and slept for most of it. I took the booklet, there might have been an invitation to intervene into it (or not – I don't recall) and wrote out my not-that-substantial poetry. I left without the booklet that evening, but acquired it afterwards and kept it with the intention of either recycling it or finishing it. The blue text is from a day ago, the black is from two thousand and seventeen and the printed is Kristina Semenova's.

What I'm wondering right now is... What are all these things that I've described? What is the time I invested into it? What is the decision to share this with the public gaze? What do my current feelings have to do with how this is valued now or later? Can I offer a substantive thought without answering these questions?

Another stream of thought as a result of deciding to focus on this group of items I've worked on (why are my sentences like this?): Is this something I should share? I like the idea of showing works that are not finished or ready. I believe each of these could become interesting art pieces, but it's also likely that not all of them will. As an artist in this western capitalist system, how smart is it to write about failed drunken evenings and bad decisions? Is that unprofessional? If yes, is it a problem? If not, then I feel I'm missing something. I can't see the whole picture, if that's even possible beyond just feeling secure in your view. I have an idea within me that is telling me whimsical, but somewhat distanced and intellectual writing is the way to do it, but at the same time I continuously fail at doing that. There is a feeling within me saying I don't actually want that at all. That I am somewhere else. That I am someone else. Changing, but only so much. In two days I might know what it's about (or just think I do). In two years this post might be forgotten because there's something else to focus on. And every other version that I cannot imagine now or ever.